Last night my niece celebrated her 30th birthday so I was elected to babysit 3 little ones.  With the crying, fighting and sweetness we called it an early night, including me with a splitting headache from all the noise.  It was good during the sweetness to have the kids at the house.

In the morning I woke early and needed to figure out what to do as I did not want to start the day the same way it ended.

So Arai and I made breakfast (pancakes and sausage) and he did some dishes as I cooked.  This little task helped set the mood for the morning. 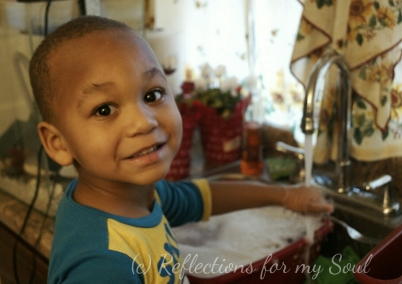 After breakfast we go dressed and went on an Adventure in the woods.  This was all done by 9am. 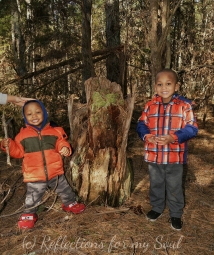 A key to finding the secret treasure 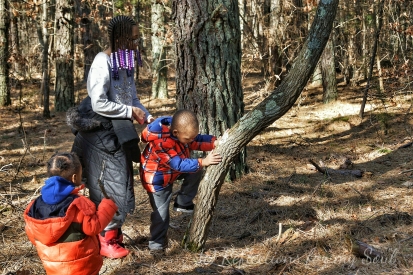 Queen Caila with a captive audience

King Arai is strong-pulling a tree out of the ground

Running with his trophy

Hole from the trophy.

We walked the woods for a good hour and a half (mainly in circles).  Arai and Camren were totally enjoying our walk.

Since this was an adventure Arai needed to find some treasure.  He found at least 5 pinecones and a piece of wood that he claimed as treasure which Mom-mom (me) had to photograph and hide in her pockets (yes I still have them).  I am think of making a treasure map and hiding some things in the woods for our next adventure.

Seeing how they all interacted in the woods made me glad that I am out of that apartment and in a house that has some land and surrounded by woods.

What do I say about me?
View all posts by Robin »

This site uses Akismet to reduce spam. Learn how your comment data is processed.